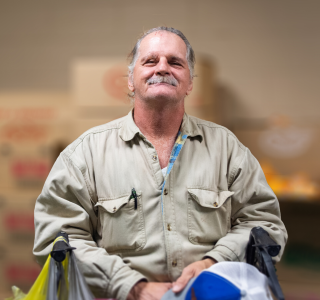 When Mike was a young man, he worked on boilers for the government, traveling frequently and exploring new cities. But at the mere age of 26, he was in a catastrophic car accident that impacted the rest of his life.

Mike was in a coma for 98 days suffering significant head trauma and was hospitalized for a year. In rehab, he had to learn how to walk and talk again. Though he lives independently, he has a difficult time getting around and still experiences mental health complications.

Twenty years later, Mike has a positive outlook on life, greets everyone with a smile, and doesn’t hesitate to remove his cap to show the large scar on his head.

But it can be difficult for Mike to make ends meet while living on a fixed income. He openly talks about needing to ‘scrimp’, save and adhere to a strict budget. Sometimes, he needs a little extra help to get him through the end of the month, and that’s when he visits his local pantry.

“I’ve met a lot of good people here. This place means a lot to me. It gets me through the last two weeks of the month when I need it.”

When reflecting on the generosity of others, Mike says, “There’s a lot of people who experience hunger in our community.”