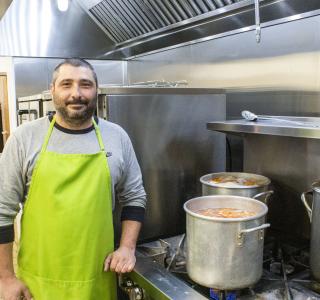 James was injured in a work-related accident and soon became addicted to the pain medication he was prescribed. His addiction progressed over the course of a year, until he realized he had $60 to his name and found himself homeless.

He discovered Refuge of Hope, an emergency shelter for men. “It was extremely embarrassing and humbling to swallow your pride and ask for help. When you’re lost in life, this place is a blessing and it heals you.”

Offering three meals a day is an important component of the shelter’s services. It allows the residents to focus on getting better, rather than worrying where their next nourishing meal is coming from.

After 11 months at the shelter, James not only became clean, but found housing, a therapy dog and counseling for his post-traumatic stress disorder and anxiety.

It’s been five years since James lived at the shelter. He now inspires other residents by volunteering in the kitchen.

“These men have an issue they’re working through and need food, shelter or encouragement. It feels good to do something positive for them.”