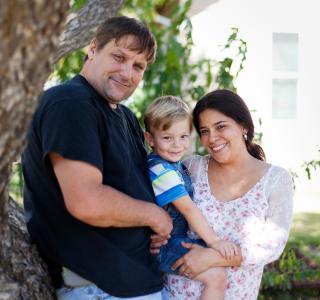 Steven and Victoria lived a comfortable life. They had a three bedroom house, a big yard, and a well-paying job that was more than enough to provide for their three-year-old son. About four months ago, they gave it all up to relocate to take care of Victoria’s mother and aunt. Her mother was getting older and suffers from Parkinson's, and her aunt has disabilities that require her to use an oxygen tank and limit her mobility. They rely on Steven and Victoria to make their meals, drive them to doctors' appointments, and make sure they take their medication – among other tasks.

Steven and Victoria firmly believe that family comes first. They were happy to sacrifice their lives to take care of two women who raised Victoria, but it hasn't been easy. Steven had to leave his job and is struggling to find a new one. They spent their savings on the move, and now have five mouths to feed instead of three. Victoria’s mother and aunt's fixed incomes doesn’t go very far. At one point, they needed food and all they had was five dollars. That's when they turned to the food pantry for help.

“The food pantry has been a lifesaver,” explained Victoria. “By giving us nutritious staples to get through the month, it's turned a situation that could have been one of hopelessness and despair, into a hopeful one – where we can feed our family and hold our heads up high through this difficult, but temporary time.”

Victoria knows there is hope for the future. She only has to look at the energy and optimism of her son to see it. Soon her husband will find work and they'll be in a better place than before the move – better, because not only will they be financially stable, but also they’re there for her mother and aunt when they need them the most. Until then, the food pantry is getting them through. They are receiving  food, and also hope by knowing they’re not in this alone. There are people out there to help; there are people out there who care.

Thank you for your continued support of the Akron-Canton Regional Foodbank. Because of your generous support, we’re able to continue to offer hope to families like Victoria and Steven’s.