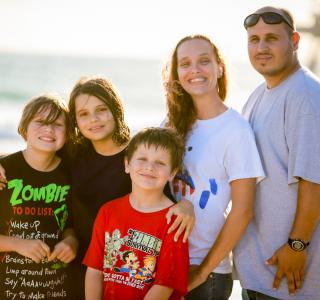 Stephanie’s husband David worked in the transportation industry for years. He had a great job; she was able to stay home and take care of their three children. They had annual passes to SeaWorld and Disneyland. If they wanted to go out to eat, their family went out to eat without hesitation.

But then the economic crisis took its toll. David was laid off, that was three years ago. He's been employed on and off since then, but it's been a challenge for him to find steady, stable work – and for Stephanie to find work too. They have cut everything down to the bare minimum – and sometimes they aren't able to pay their bills on time.

Stephanie began volunteering at the food pantry at her children’s school. She was unaware of its existence, but after volunteering, also began bringing food home for her children.

“We get fresh fruits and vegetables that would be very hard to afford otherwise, and are critical to giving my children the energy they need to continue to do positive things like play sports and succeed in school,” she said.

After David was laid off and it became clear finding work wouldn't be easy, David and Stephanie made the decision that she would go back to school. They wanted to be able to provide for their kids without worry, and knew that by furthering her education, it would give them a better opportunity to do that. Stephanie graduated a couple months ago and is looking for work.

“I know that soon our family will be out of this tough time, but I will always be grateful that the food pantry provided us with extra help when we needed it most,” she said.

By helping families like David and Stephanie’s during difficult times, you’re truly paving the way for them to have a more successful future. Thank you for your support of the Akron-Canton Regional Foodbank and for giving families hope!