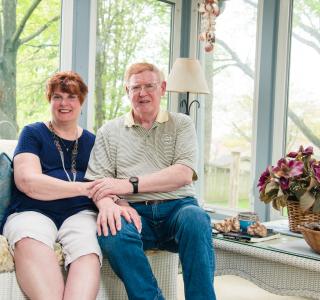 Larry has been a steadfast supporter of the Foodbank for nearly 10 years. Philanthropy and showing kindness to others was ingrained in him at a very early age. He remembers seeing his grandfather and father consistently showing compassion to individuals in need.

After a long career in banking, Larry has the ability to make an impact in his community through the charities he supports. “Giving back is something I believe strongly in. God has put me in different situations to be able to do that, and I try to be the servant he wants me to be.”

Though Larry has supported the Foodbank for years, it wasn’t until he met his wife, Necia, that giving to the Foodbank became much more personal for him.

Necia lost the majority of her income as a real estate agent after the market crashed in 2008. Trying to make ends meet, she found a job as a telemarketer, and to supplement her income, also cleaned houses, sold homemade pies and offered childcare in her home. She remembers her electric being turned off in January and finding new ways to create and extend the longevity of meals with limited resources.

Necia began attending a local Bible study.Her fellow members recommended she visit the church pantry. She was reluctant at first, but found the pantry immensely helpful in extending her limited budget.

“It’s taught me to be very appreciative,” she says of her experience with hunger. “You see things differently after you’ve gone through something like I have.”

Larry and Necia met in 2013 and were married a year later. Necia is following her passion in real estate once again, and together, the couple continues to give back to their local community.