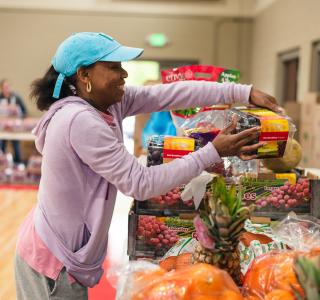 A Direct Distribution allows the Foodbank to transport and distribute a significant volume of nourishing, surplus food quickly; as many as 16,000 pounds of food can be distributed in approximately two hours. The Distribution places fresh produce, often the products of Ohio farmers which may otherwise go to waste, into the hands of food insecure families.

When choosing a new Direct Distribution site, the Foodbank examined the amount of, and ease of access to, hunger-relief programs in the Greater Massillon area. Realizing there was a lack of services in the Perry community, the Foodbank approached Maureen Kampman Tate, executive director of Stark County Hunger Task Force, a leader in hunger relief within Stark County, to see if she and her team of volunteers would help manage the distribution.

"We are grateful to be able to bring additional food to our community members through this Direct Distribution,” said Kampman Tate. “This partnership is an excellent extension of our current local programs by bringing food directly to people who need it most.”

The Foodbank also engaged New Life Tabernacle Church to see if they’d be willing to open their space for the distribution. The church pastor, Keith Blaylock, welcomed the opportunity to serve community members facing hunger using the church’s facility. His congregation was excited to be part of the distribution’s efforts, as they receive phone calls on a weekly basis from people seeking support services.

“We’re simply fulfilling scripture,” he said. “It says, ‘If there are hungry people, feed them.’ We feel like it’s just another avenue for us to serve our community.”

Pastor Blaylock volunteered at the first Direct Distribution in April. “It was definitely work, but it was so much fun working with everyone, meeting new people and helping people. To see the smiles on people’s faces when I handed them a cake or pastries, and hearing them say, ‘My kids are going to love this!’ – It was pretty amazing.”

This unique partnership between the Foodbank, church and Task Force, exemplifies what great work can be accomplished when multiple organizations committed to the same cause, come together to create meaningful change.