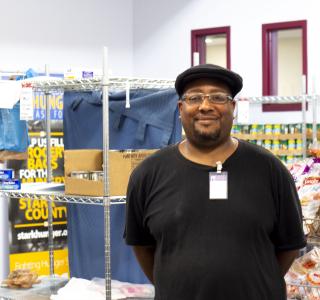 Fred loves to cook. He openly shares recipes, inside secrets for tender barbeque, and how to spice up simple dishes. Unfortunately, because of his back problems he’s no longer able to stand all day wearing his chef hat, cooking at a restaurant. Now he’s only cooking for himself, and that’s becoming increasingly difficult on his fixed income.

His children are home for the summer, making his grocery bill even more expensive than he’s used to. Fred has found himself at a local pantry in need of groceries to help make ends meet. He’s able to supplement his food assistance benefit by receiving canned goods and pantry staples at the pantry. He explains that some months he might use his food assistance to only buy meat to ensure he has protein. He hopes the pantry will offer the other ingredients he needs to make a wholesome meal.

While he continues to look for work that he’s physically able to do, Fred volunteers 22 hours per month at the Stark County Hunger Task Force pantry, where he also receives food. This commitment enables him to receive government assistance while looking for work.

Fred enjoys the time he spends helping at the pantry and believes it’s been an eye-opening experience. Though he too is currently struggling financially, he realizes some people in the community are having a difficult time putting food on the table for their families.

“A lot of people are still hungry. The pantry and its supporters are doing a good job putting a smile on so many peoples’ faces.”