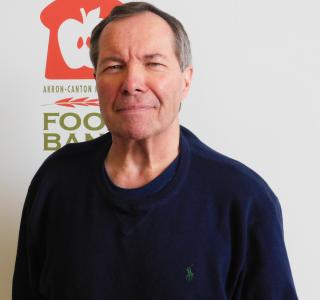 Dennis, who is semi-retired and self-employed, has been volunteering at the Foodbank since 2012. He shared that coming in every week grounds him and reminds him where he is in his week.

Originally, Dennis was volunteering in the Foodbank's Volunteer Center, sorting and inspecting donated items, but he found it difficult to stand for hours, so the volunteer staff found him a seated job, and the Development team welcomed him with open arms.

Dennis shared he loves coming to volunteer at the Foodbank because he has made many friends with both staff and other volunteers. “I can’t emphasize enough how much I love the environment and the positive vibe that is infectious throughout the whole organization.”

Dennis says he’s always impressed by the extreme gratitude he’s shown. “Not a week goes by that I don’t get a warm and sincere thank you for my time volunteering.”

He mentions that the senior population is “bursting at the seams,” and that he loves to recruit his friends and other new retirees to volunteer at the Foodbank. Dennis even puts his family to work; he has his grandchildren volunteer when they visit him from out-of-state over the summer. His grandson even says that the Akron-Canton Regional Foodbank is his favorite non-profit!

“To the other recently retired seniors, if you’re not sure what to do, come and volunteer at your Foodbank,” Dennis stated. “I know that they will be welcomed warmly; you’ll have fun working for a great cause.”