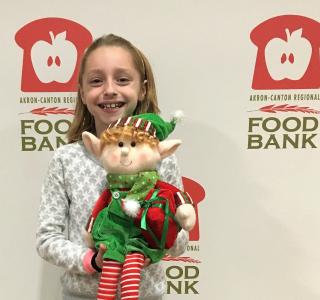 Addison Lockwood is a second-grader with a big heart.

Addison, who attends Chapel Hill Christian School South Campus, has raised more than $650 for the Akron-Canton Regional Foodbank’s Selfless Elf 5k race, making her the Foodbank’s youngest VIP Elf! Addison’s dad’s girlfriend Tara said they learned about the race after seeing the pamphlet in their bag from the Jack-O-Lantern 5k they ran together in October.

“Once I read the event information, I told her Dad that this would be an awesome thing for her to do,” Tara said. “This gives her the opportunity to raise money for the Foodbank, be aware that she is very blessed and help guide her in helping others.”

After discussing it with her parents, Addison said she decided she wanted to try and raise the money.

“I just felt bad for all the families in need,” Addison said.

Addison’s parents created a website and set Addison’s goal for $250. She made a video of herself explaining why she wanted to participate in Selfless Elf and then asked for $5 which could provide as many as 20 meals to people in need.

“We started off small,” Tara said. “We sent the video to family and friends. She took it to school. We even took it to our family Thanksgiving.”

Addison’s family, friends and teachers were so excited that she was participating in such a fun, philanthropic event, they happily donated the $5 and more! Soon, Addison had met her original goal.

After raising enough for more than 2,600 meals for the Foodbank, Addison is glad that she raised the money because she knows that other kids like her are struggling with hunger.  She believes it’s important for her to help them if she can.

“I feel bad for the kids who don’t have the same things I do,” she said. “I want to make sure that we can share.”

Already looking ahead Addison says she wants to raise even more money next year.

Tara says their family hopes to make a tradition out of it.

“Hopefully this is something we can continue to do every year,” she said. “Maybe next year we can do something creative to raise the money since she likes to set the bar so high.”

Addison said she loves being active and has run in the Hop for Hope, Hero Run, Josette Beddell Memorial, Jack-O-Lantern and Turkey Trot 5Ks this year. She also loves to dress up.

Tara says that everyone is thrilled that Addison reached her additional goals.

“For her to be 7-years-old and be so enthusiastic about raising this money and doing something good, everyone was supportive,” she said. “It reiterates our values of trying to give back to our community.”