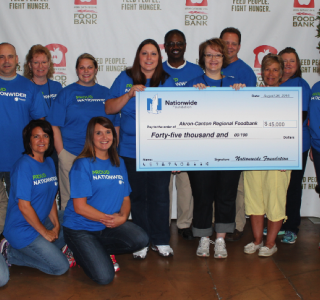 The Nationwide Foundation awarded the Akron-Canton Regional Foodbank a gift in the amount of $45,000, which will provide as many as 180,000 meals to food insecure families in the region. The award is a part of a recent gift of $1.4 million to Feeding America that will address food insecurity and help provide healthy options to food banks across the country. This year marks the seventh year of the Nationwide Foundation’s partnership with Feeding America.

Nationwide associates donate numerous volunteer hours to ACRFB annually and participate in the Harvest for Hunger Campaign each spring.