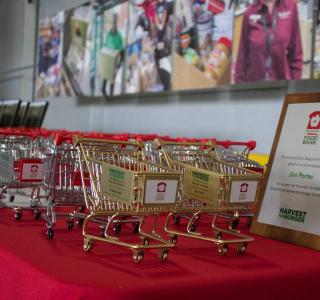 Community leaders, campaign coordinators and Foodbank supporters came together to celebrate the success of the 2018 Harvest for Hunger Campaign during its celebration event held at the Akron-Canton Regional Foodbank on May 18, 2018.

This year’s Campaign was another record-breaking year and will help provide more meals than ever before to community members struggling with hunger, explained Campaign Co-Chair Dr. Brian Harte, president of Cleveland Clinic Akron General.

“I had only been in Akron 20 months before I became a part of this campaign, and it’s been a fantastic experience leading such a critical event for our community,” said Harte.

Harte announced this year’s campaign results to more than 120 guests in attendance. With support from the community, the Campaign raised enough food and funds to provide more than 5.3 million meals to its network of hunger-relief partners, surpassing its goal of 5.2 million meals.

“This meal goal was comprised of more than 400,000 pounds of food and $1,250,000!,” said Harte. "We received tremendous support from the community. We’re within $60,000 of our financial goal, and donations will continue to roll in throughout the remainder of the year.”

With more than 200 organizations, schools, churches, social groups and businesses organizing food & funds drives, the Foodbank saw a significant increase in the number of pounds of food collected throughout the Campaign. A large food contributor to this year’s efforts was Ball Corporation, donating more than 303,000 pounds of food.

"Harvest for Hunger is a campaign that truly demonstrates how supportive our community is,” said Dan Flowers, Foodbank president and CEO. “Each and every dollar raised or canned good collected is the difference between hunger and hope for so many of our neighbors struggling with food insecurity. Thank you to everyone involved in this campaign; I hope you truly feel the gratitude we have for you.”

The Campaign’s top financial donors were FirstEnergy Corporation, Shearer’s Snacks and The Goodyear Tire and Rubber Company. Top food contributors were Ball Corporation and the National Association of Letter Carriers.

“One of the easiest ways for the public to support Harvest for Hunger was through a donation at the cash register at participating grocery stores and retail partners through Check Out Hunger,” explained Gina Campbell, director of development for the Foodbank. “This year, Check Out Hunger raised more than $534,000 and nearly 5,500 pounds of food from their patrons in six weeks. That’s enough food for more than 2.1 million meals!”

For more information about donating to support hunger-relief efforts, like Harvest for Hunger, please visit akroncantonfoodbank.org or call 330.535.6900.