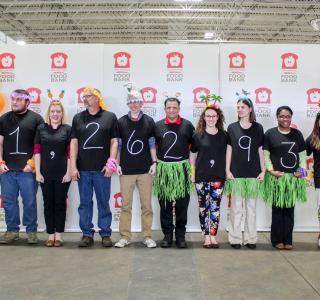 Community leaders and campaign coordinators rallied at the Akron-Canton Regional Foodbank to celebrate the record-breaking success of the 2017 Harvest for Hunger campaign during a luau-themed event on Friday, May 12, 2017.

The 2017 Harvest for Hunger campaign raised $1,262,933 and more than 100,000 pounds of food for the Foodbank. Because of the success of the campaign, the Foodbank will be able to provide more than 5 million meals to those struggling with hunger in our community.

“Today, we celebrate you— our partners, friends, and all the people who continually give their time and talents to us so freely, and openly,” said Dan Flowers, President & CEO of the Foodbank. Thank you for supporting Harvest for Hunger, a campaign waged in the trenches, where pancake breakfasts, dollar dress down days and small donations at grocery store lines literally are the difference between hunger and health for thousands of neighbors in our region.”

More than 200 businesses and organizations held food and funds drives to support Harvest for Hunger. The campaign’s top financial donors were FirstEnergy Corporation, Akron Children’s Hospital, Shearer’s Snacks and The Goodyear Tire and Rubber Company. The National Association of Letter Carriers had the largest food drive this year collecting more than 28,900 pounds from Stamp Out Hunger.

For more information about donating to support hunger-relief programs like Harvest for Hunger, please visit akroncantonfoodbank.org or call 330.535.6900.