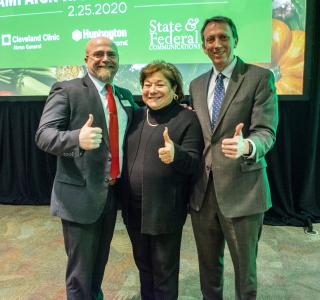 The Akron-Canton Regional Foodbank welcomed nearly 500 guests to its annual Harvest for Hunger Campaign kick-off breakfast. Enthusiastic energy filled the ballroom at the John S. Knight Center on Feb. 25 as community members rallied in support of the 29th annual Campaign.

This year’s goal is $1.32 million and 100,000 pounds of food, the equivalent of 5.3 million meals. All proceeds from the Campaign go directly to providing free food for the local community, distributed through the Foodbank’s network of more than 500 pantries, hot meal sites, shelters, backpack and after-school programs and other hunger-relief programs.

To jumpstart fundraising for the Campaign, a Leap Day fundraising match challenge was announced at the breakfast. The Goodyear Tire & Rubber Company, The J.M. Smucker Company and an anonymous donor agreed to match all donations, dollar for dollar up to $26,500, until Leap Day on Feb. 29. If the match challenge is met, it will help provide the equivalent of 212,000 meals for the local community. Donations were accepted via text message during the event, and guests were also encouraged to donate by visiting akroncantonfoodbank.org.

The Campaign is led by returning co-chair Dr. Brian Harte, president of Cleveland Clinic Akron General and new co-chair Elizabeth Bartz, president and CEO of State and Federal Communications, Inc. They encouraged guests to support the Campaign by coordinating food and funds drives, participating in Check Out Hunger, the donation collection that takes place in many local supermarkets, through employee giving campaigns and by volunteering.

Delivering the inspiring keynote message was special guest Roula Braidy, manager of language and special access services at Akron Children’s Hospital. Braidy shared her personal struggles with hunger as a single mom of three recovering from an abusive relationship, and her perseverance in providing a safe home for her children while building a life for herself.

“I had no money to feed my 3 children or even put gas in my car,” she said. “I decided the only way to make good money and raise my children was to go back to college and get a degree. My degree from Lebanon was not accepted by the college system here, so I had to start over.”

Dan Flowers, president and CEO of the Foodbank, shared impactful Foodbank stories made possible because of the community’s support, including providing hunger-relief partners with more than 20 million pounds of food for free in 2019. The organization used its fundraising resources to secure and provide nearly $800,000 worth of food grant support for its partners and gave away $200,000 worth of coolers, freezers and other non-food, capacity building resources to help support these programs.

“This campaign is of enormous consequence for our network,” he said. “Our ability to sustain and grow is dependent on our ability to sustain and grow the Harvest for Hunger Campaign. It is absolutely critical to the survival of the emergency food system; I can’t say that enough. We hope that you will join us in renewing your support of this campaign and today we hope to inspire you to do just that.”

Shelly Hinton, vice president of the Foodbank, shared news about the Foodbank’s plan to expand its operations into Stark County with the building of a new facility in Canton, which was announced last week. The second facility will help the Foodbank achieve its vision for a hunger-free future. The project is critical in its efforts to provide enough food for all who are food insecure.

The Harvest for Hunger Campaign is the Foodbank’s largest fundraising initiative and helps support food distribution all year long. In addition to raising needed funds and food items for the Foodbank’s eight-county service area, the Campaign hopes to educate the community on the tough choices people struggling with hunger are often forced to make, like choosing between groceries and paying for utilities, medical care, transportation costs and housing.

If interested in participating in the 2020 Harvest for Hunger Campaign, please visit akroncantonfoodbank.org/hfh.