Foodbank welcomes new board members for 2019 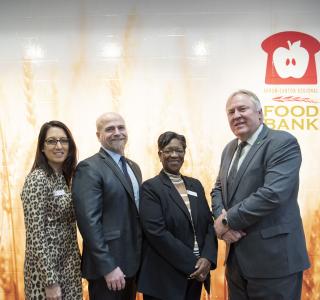 The Akron-Canton Regional Foodbank announced the addition of three new members to its 2019 Board of Directors: Judge Alison Breaux, Jerod Cherry and Kristin Hannon.

Judge Alison Breaux joined the Summit County Court of Common Pleas when she was elected to a full term in January 2017. Prior to her election, Breaux served as a civil magistrate with the Akron Municipal Court for five years. She has served on several boards, including the St. Vincent Parents Association and Life Is Good No Matter What cancer charity. She is also a member of the Daughters of the American Revolution, Akron Bar Association, Scanlon Inn of Court and Westminster Presbyterian Church. Breaux has been married since 2000 and she and her husband have three children.

“When I visited the organization years ago, I was most impressed with the vibe among employees and staff,” said Breaux. “I was given a “nook and cranny” tour and met individuals throughout the organization who seem to love what they do and where they work - from the truck drivers, to the forklift operators, to the volunteer coordinators to the executives. This speaks volumes about the organization’s mission, and its employees’ dedication to it. I was honored to be asked to be a part of it all.”

Jerod Cherry has been a radio talk show host for ESPN 850 WKNR in Cleveland since 2009. He is also a game-day pregame host for the Cleveland Browns radio network. Cherry, a football player in the NFL from 1996 - 2004, won three Super Bowls with the New England Patriots. He has supported the Foodbank’s Taste of the Pro Football Hall of Fame and has been an avid volunteer with the Foodbank, sorting and repacking food 2-3 times per month for nearly two years.

“One of the reasons I feel privileged to call Northeast Ohio home and serve on the Board, is due to the commitment and willingness of the people I serve beside at the Akron-Canton Regional Foodbank,” said Cherry. “I speak from personal experience concerning what it’s like to not have enough food on my plate and to go to bed and wake up hungry. The Foodbank is a reflection of our community’s strong desire to work together to ensure no one experiences routine bouts of hunger and malnourishment.”

Kristin Hannon currently serves as an HR manager with Spectrum. Prior to joining Spectrum, she was the director of human resources at the University of Mount Union and also spent six years at Stark State College. Hannon began her career at Nationwide Insurance where she worked for 23 years. She is a graduate of the 30th Class of Leadership Stark County and is extremely active in her community, including serving on the boards of Stark Tuscarawas Workforce Development, ArtsinStark and the Stark County Human Resources Association.

“I am honored to have the opportunity to again serve with the Akron-Canton Regional Foodbank,” said Hannon. “During my first board service, I was able to participate in the creation of the 2020 Strategic Plan. Now I am eager to see the next phase and work with the dedicated Foodbank team and board members to continue initiatives that will lead us toward communities free of hunger.”