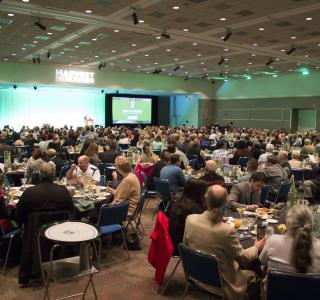 The Akron-Canton Regional Foodbank welcomed nearly 500 guests to its annual Harvest for Hunger Campaign Kick-off Breakfast, the largest in attendance since the breakfast began in 2016. Enthusiastic energy filled the ballroom at the John S. Knight Center on February 15 as community members came together to rally behind the 27th annual campaign.

The Harvest for Hunger Campaign is the Foodbank’s largest fundraising initiative and helps support food distribution all year long. 100 percent of all funds raised in this campaign goes directly to providing free food for those in need in the local community.

Foodbank Vice President, Shelly Hinton, highlighted this year’s ambitious goal, $1.31 million and 100,000 pounds of food. Ideally, the Campaign will help provide the equivalent of more than 5.2 million meals to the Foodbank’s network of hunger-relief partners.

Hinton also touched on the Campaign’s desire to educate the community on the tough choices those struggling with hunger must make; choosing between groceries and paying for utilities, medical care, transportation costs, etc.

This year’s Campaign is led by two respected, community leaders, Dr. Brian Harte, president of Cleveland Clinic Akron General, and Jim Porter, publisher and CEO of Gatehouse Media Ohio. This is Porter’s third year as an honorary co-chair for the Campaign. The men shared the stage at the breakfast to talk about the impact of hunger in their respective communities.

“What the Foodbank does really resonates, because we see in our emergency rooms, hospital offices, and our doctor offices every day, the health consequences of hunger and food insecurity,” said Dr. Harte. “It is a very, very real thing and it is heart-breaking to see how food insecurity and hunger play into poor outcomes for our community.”

The program ended with Foodbank President & CEO Dan Flowers highlighting the Foodbank’s record distribution in 2017 of 32.9 million pounds of food distributed, putting the organization on pace to surpass its bold goal of closing the hunger gap by 2025.

“That is our commitment. That is our plan. And if you like those things, we hope you’ll continue to invest in our mission by supporting the Harvest for Hunger Campaign,” said Flowers. “Today I am calling upon all of you to be heroes in our story. We are engaged in something worthy and good. Something that can be better because you were a part of it. Something that can relieve loneliness and sadness, help kids do better in school, stave off disease, and build a better community. We. Need. You.”

A special component to the breakfast was the live streaming video from the Foodbank to the big screens at the Knight Center. Due to overwhelming community support, a new venue was needed to accommodate more guests; the Foodbank had reached its maximum capacity for the event the past two years. To ensure attendees still felt connected to the Foodbank’s mission, Amani Abraham, journalist with WKYC-TV 3, streamed live with interviews from hunger-relief programs picking up food, and volunteer groups from Huntington National Bank and Cleveland Clinic Akron General, title sponsors for the breakfast.

If interested in participating in the 2018 Harvest for Hunger Campaign, below are two ways to get involved:

The Harvest for Hunger Campaign is one of the largest food & funds drive in the country. It is a collaborative partnership bringing together four regional food banks, the Akron-Canton Regional Foodbank, Greater Cleveland Food Bank, Second Harvest Food Bank of Mahoning Valley and the Second Harvest Food Bank of North Central Ohio, and focuses on fighting hunger across 21 counties in Northeast Ohio.