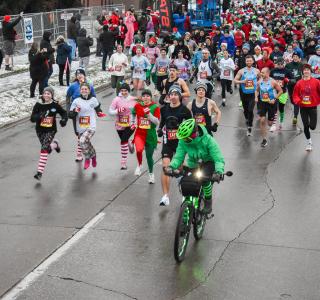 The sound of bells could be heard jingling through downtown Akron Saturday morning as nearly 900 elves participated in the Akron-Canton Regional Foodbank’s Selfless Elf 5k. The Foodbank celebrated the 10th anniversary of the race, a signature event of its annual Holiday Campaign.

The family-friendly event encouraged both runners and walkers to dress in festive costumes. Participants received elf socks, striped gloves and a Christmas bulb headband to help spread holiday cheer. Race participants enjoyed holiday tunes piped into the Foodbank’s warehouse and from carolers along the race route.

To celebrate the 10th anniversary, families enjoyed plenty of treats donated by local companies, a photobooth and a sign-making station to cheer on their favorite elf.

Celebrating more than the holiday spirit, Chad Quistad of Stow proposed to Kari Larson of Mayfield Heights after the race. Running races together is a new tradition for the couple. Both parents were present to witness Quistad kneeling on one knee to profess his love.

Because of the community’s support, the race will help the Foodbank distribute the equivalent of thousands of meals to its network of 600 food pantries, hot meal sites, shelters, children and senior programs within its eight-county service area. These programs will then distribute the food directly to people in need.

“It feels amazing to celebrate the 10th anniversary of Selfless Elf with so many friends this year,” said Dan Flowers, Foodbank president and CEO. “A decade ago, when we decided to host a race in the middle of December, we weren’t sure if it would be well-received. But it’s become an annual tradition for so many families and is a great way for community members to support the work of the Foodbank.”

Overall top female runner was Macy McAdams, 23, of Canton who has run the race for nine years. “I run because it’s part of the holidays; it wouldn’t be Christmas without it,” she said. “I’m a high school teacher so I see a lot of the Foodbank’s impact with some of my students. I’m super grateful to help out.”

Overall top male runner was Clay Peets, 19, of Akron. “I love running these races, but it is so much bigger than that. The money goes to a good cause and there's so many people out here supporting it. It's a good feeling,” he said.

The Most Dashing award winner for best costume was a mini Santa Claus, Wyatt Williams, 8, of Wadsworth. “We love the Foodbank,” said Jenny Williams, Wyatt’s mom. “I work for Akron Children’s Hospital, so it’s always been near and dear to our hearts.”

The VIP Elf raising $600, helping provide the equivalent of 2,400 meals, was Mark Mitchell, a Foodbank employee.

For more information on runner and walker winners in each age category, visit selflesself.com.

A special thank you to title sponsors NJM Insurance Group and Shearer’s Snacks for their support of the event.