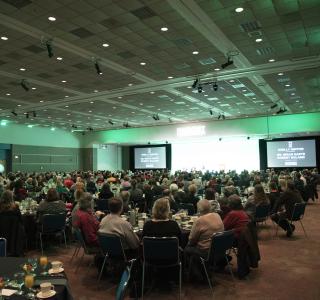 The Akron-Canton Regional Foodbank welcomed nearly 500 guests to its annual Harvest for Hunger Campaign kick-off breakfast, the largest in attendance since the breakfast began in 2016. Enthusiastic energy filled the ballroom at the John S. Knight Center on Feb. 26 as community members rallied in support of the 28th annual Campaign.

Businesses and organizations interested in supporting the Campaign received food and funds drive coordinator kits as they left the breakfast to the booming and rhythmic beat of drummers from the Buchtel Community Learning Center band. The surprise performance concluded the event after Foodbank President and CEO, Dan Flowers, asked everyone to help drum up support for the Campaign.

Delivering the keynote message was special guest David Flowers, a licensed professional counselor, college professor, author and brother to Foodbank President and CEO, Dan Flowers. David is well-known for his motivational messages as a public speaker and highlighted the importance of the community coming together to support one another.

“What the world needs now and always, is love, sweet love,” said David. “As business leaders, people of influence, staff and supporters of the Foodbank and its mission, you have an opportunity to make a significant impact by simply being present for the people in your life. That’s ultimately the most meaningful thing we have to give.”

This year’s Campaign goal is $1.32 million and 100,000 pounds of food, the equivalent of more than 5.3 million meals. All proceeds from the Campaign go directly to providing free food for the local community.

The Campaign is led by two respected, community leaders, Dr. Brian Harte, president of Cleveland Clinic Akron General, and Robert Roland, managing partner of Day Ketterer. This is Harte’s second year as an honorary co-chair and Roland’s first year involved in the Campaign in a leadership role. The men shared the stage at the breakfast to talk about the impact of hunger in their respective communities and how they plan to engage their employees in their fundraising efforts.

Harte announced the launch of the Compete to Eat challenge, a friendly competition among Cleveland Clinic Akron General, Summa and Akron Children’s Hospital. Harte is sure the staff at his hospital will raise more food and funds than the other two health systems.

The Harvest for Hunger Campaign is the Foodbank’s largest fundraising initiative and helps support food distribution all year long. In addition to raising needed funds and food items for the Foodbank’s eight-county service area, the Campaign hopes to educate the community on the tough choices people struggling with hunger must make; choosing between groceries and paying for utilities, medical care, transportation costs, etc.

If interested in participating in the 2019 Harvest for Hunger Campaign, please visit akroncantonfoodbank.org/hfh.