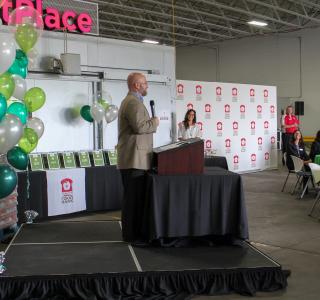 Community leaders and campaign coordinators rallied at the Akron-Canton Regional Foodbank to celebrate the record-breaking success of the 2016 Harvest for Hunger campaign during an event on Friday, May 13, 2016. This year marked the 25th year of the campaign.

With incredible community support, the 2016 Harvest for Hunger campaign has raised $1,042,000 and 80,000 pounds of food to date for the Foodbank. Because of the success of the campaign, the Foodbank will be able to provide more than 4 million meals to those struggling with hunger in our community.

“Harvest for Hunger is the community’s efforts that makes millions of pounds of food free to charities and people in need through the Foodbank,” said Dan Flowers, President and CEO of the Foodbank. “This campaign has been a tough fight with great effort from our leaders and supporters. Today we are celebrating the hard work, kindness and generosity of the great people and companies that made it a success.”

More than 200 businesses and organizations held food and funds drives to support Harvest for Hunger. This year’s top financial donors were FirstEnergy Corp. and The Goodyear Tire & Rubber Company. The Aultman Health Foundation had the largest food drive this year collecting more than 6,400 pounds.

Flowers reminded guests that there is still time to support the campaign.

“Don’t forget that this Saturday is Stamp Out Hunger – America’s largest one-day food drive hosted by the National Association of Letter Carriers Food Drive,” he said. “Simply place non-perishable food items by your mailbox on Saturday morning and we’ll take care of the rest.”