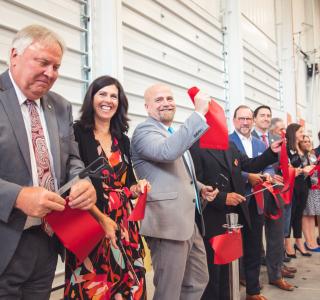 The ceremony began with remarks and a presentation of colors by Ohio Secretary of State and veteran Frank LaRose. City of Canton Mayor Thomas Bernabei announced that July 1 is officially recognized as Food Security Day with the reading of a city proclamation.

Foodbank Vice President Shelly Hinton gave a brief history on how the new facility stemmed from much research, not only by Foodbank staff, but also through The Future of Food Security in Stark County report, led by the Stark Community Foundation.

“It all began with a vision. A vision for community food security and collaboration around food issues. A vision to strengthen our collective response to hunger by working together. And a vision for an investment in the well-being and enhancement of an important area along one of Canton’s key downtown corridors,” said Hinton.

Canton native Keith Monda was also a guest speaker during the program. He flew in from Florida to attend the ceremony and offered a few words on the importance of this project for the Canton community. Monda’s commitment to hunger relief is evident not only in his significant contributions to the Foodbank, the new food pantry is named after him, but he also served as the past board chair of Feeding America, the nation’s largest charitable response to hunger relief.

Foodbank President & CEO Dan Flowers reflected on how the pandemic proved how fast things can change and how important infrastructure and planning can be.

“We rethought food banking and collaborated to ensure that the needs in this neighborhood, this community and around the region can be met at an entirely different scale, with dozens of innovative, effective programs and ample resources to meet people where they are. The Stark County Campus will offer hope for a new and brighter future.”

Flowers also highlighted various items included in a time capsule that will be placed in the new building and opened in 35 years by future Foodbank staff. Items included newspaper articles, a photo book, brochures and annual reports, as well as an iPhone, k-cup, COVID-19 mask and Foodbank apparel.

The program concluded with the cutting of the ceremonial ribbon by various stakeholders and the loading of the first food order onto the Stark County Hunger Task Force’s vehicle.

Guests were then invited to tour the new facility. They had the opportunity to see the Keith D. Monda Family Food Pantry & Resource Center that will offer fresh produce, pantry staples and other items to people in need; the Danbury Senior Living Teaching Kitchen that will support food-related training and educational activities for the community and hunger-relief partners within the Foodbank’s network; and the Aultman Health Foundation Resource Room that will provide community members a convenient space to learn about and connect with support services other than food.

When describing the various resources available in the new facility, Hinton said, “Together, we have constructed not only a purpose-built food bank in the heart of Canton where the need is great, but because of your generosity, we’ve built a comprehensive facility that will offer wraparound services to benefit the entire community.”

The Stark County Campus is the culmination of the Foodbank’s strategic plan to help ensure all individuals within the eight counties it serves have access to safe and nourishing food. The new facility will increase regional capacity for fresh food distribution, will expand the Foodbank’s reach in communities of need by engaging new hunger-relief programs, and will engage thousands more volunteers in local hunger-relief efforts.

Construction of the new facility was made possible by the community’s generosity and support of Growing for Good: The Campaign to Reach Further and Feed More, the Foodbank’s capital campaign. Leadership support, $500,000 or more, has been received by American Electric Power Foundation, Danbury Senior Living and Bill & Pearl Lemmon, Development Finance Authority of Summit County & Capital One, FirstEnergy Foundation, The Jeffrey Fisher Family, The Hoover Foundation, The Keith D. Monda Family, Sisters of Charity Foundation, The J.M. Smucker Company and Stark Community Foundation.