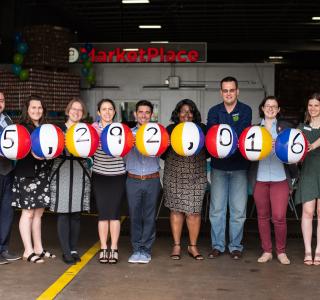 Akron-Canton Regional Foodbank thanks community for its efforts in helping raise more than 5.2 million meals during 2019 Harvest for Hunger Campaign!

The Akron-Canton Regional Foodbank’s warehouse transformed into a beach party on Friday to celebrate the success of the 2019 Harvest for Hunger Campaign. Community leaders, campaign coordinators and Foodbank supporters came together to celebrate the completion of another fruitful year.

More than 200 organizations, businesses, individuals, schools and churches participated in the Campaign by collecting nonperishable food items and monetary donations for the Foodbank.

One by one, representatives from those organizations silently moved to the front of the room, with large, numbered beach balls, unveiling to the 100 guests in attendance, that 5,292,016 million meals was raised during this year’s Campaign.

“This meal goal was comprised of more than 142,354 pounds of food and $1,293,347!” said Harte. "We received tremendous support from the community. Thank you and congratulations on an outstanding Harvest for Hunger Campaign!”

Dan Flowers, president and CEO of the Foodbank, thanked all the coordinators in attendance for their dedication to the Campaign. He highlighted photos of employees taking a pie to the face and a supporter having his head shaved.

“It’s because of this dedication that your Foodbank can provide meals for our community. Poverty continues to be a serious issue in Northeast Ohio. The urgency in this work has not relented at all. The Harvest for Hunger Campaign continues to serve as a safety net for people struggling with hunger.”

“Supermarket partners continue to be a driving force behind the Campaign,” said Harte. “This year, they collected more than $515,000 and 5,000 pounds of food from their customers during the six-week timeframe of Check Out Hunger. Collectively, they’ve helped provide more than 2 million meals for our local community!”