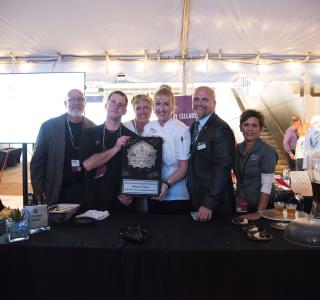 More than 600 guests helped provide the equivalent of more than 1 million meals to support individuals and families in our community struggling with hunger, surpassing its goal and raising the most in the event’s history.

“We’re beyond grateful for the support of the community members who join us for this very special event,” said Dan Flowers, president and CEO of the Foodbank. “It’s so great to see so many of our closest friends come together to support our mission and the neighbors in our community facing food insecurity.”

Hall of Fame Gold Jackets attended the event to mingle with guests and sign autographs. Member of the 2018 induction class, Robert Brazile, was a popular enshrinee with guests and was joined by other incredible legends of the game including Walter Jones, Bruce Matthews and Will Shields.

This year’s event showcased delicious cuisine and beverages provided by 24 local and national vendors. Some of the area’s top chefs came together to support the Foodbank and also to compete for the title of Taste of the Pro Football Hall of Fame People’s Choice award winner.

Chosen as the 2018 People’s Choice award winner was SHY Cellars. SHY Cellars has earned this title five times and wowed the crowd by serving an asiago-herbed Yukon gold mashed potato with a peppercorn filet, topped with a red wine demi-glace and crispy onions.

Meeker Wines, provided by Esber Beverage, was the featured wine provider at the event. Molly Meeker, co-owner of Meeker Vineyards, originally from Youngstown and currently living in California, was present to mingle with guests and offer wine tasting tips.

Taste of the Pro Football Hall of Fame is presented by Citizens Bank and Rubber City Radio Group stations including WQMX, WONE, WAKR and WNWV.

For more information about Taste of the Pro Football Hall of Fame or the Akron-Canton Regional Foodbank, visit akroncantonfoodbank.org or call 330.535.6900.