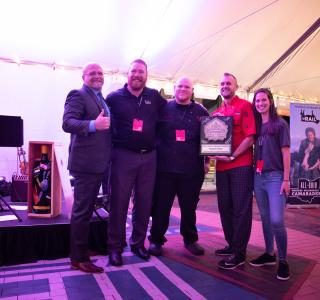 Nearly 700 guests helped provide the equivalent of 670,000 meals to support individuals and families in the community struggling with hunger. All donations raised benefit the local fight against hunger.

“We’re extremely thankful for the community’s support during this event. It humbles me to see so many friends come together to support the Foodbank’s hunger-relief efforts,” said Dan Flowers, president and CEO of the Akron-Canton Regional Foodbank. “Thousands of our neighbors in need will have access to nourishing meals because of your support and generosity.”

Hall of Famers adorned in their iconic gold jackets attended the event to mingle with guests and sign autographs, and included Kevin Greene, Jerry Kramer, Billy Shaw and Roger Wehrli.

This year’s event showcased delicious cuisine and beverages provided by 23 restaurants, breweries and wineries. Some of the area’s top chefs came together to support the Foodbank and also to compete for the title of Taste of the Pro Football Hall of Fame People’s Choice award winner.

After guests strolled through the tents sampling each purveyors’ dishes, they cast their vote for their favorite item. Chosen as the 2019 People’s Choice award winner was The Rail. The Rail also earned this title in 2017 and wowed the crowd by serving its Mojo and Bootlegger burgers and blueberry basil lemonade.

“It’s great to be able to help so many people in need,” said Head Chef Mike Hawks. “And we enjoy having the opportunity to connect with all the people here tonight. We’re all here fighting the same fight.”

A unique aspect of the evening was the announcement from The Centennial Committee about next year’s celebration of the NFL’s 100-year anniversary. The celebration will include a variety of events and activities for the community.

Amani Abraham, reporter with WKYC – TV Channel 3, served as the evening’s emcee and encouraged guests to bid on live auction items. “When people come together to do good, great things can happen. Our community is built on the foundation of helping and supporting our neighbors.”

Taste of the Pro Football Hall of Fame is presented by Citizens Bank and Rubber City Radio Group stations including WQMX, WONE, WAKR and WNWV.

The annual event is a partnership between NFL teams and food banks across the country. Local events are held in NFL cities throughout the year, and a national Taste of the NFL event is held the evening before the Super Bowl. The Akron-Canton Regional Foodbank is proud to partner locally with the Pro Football Hall of Fame in lieu of an NFL team.

For more information about Taste of the Pro Football Hall of Fame or the Akron-Canton Regional Foodbank, visit akroncantonfoodbank.org or call 330.535.6900.