Many military families struggling with hunger 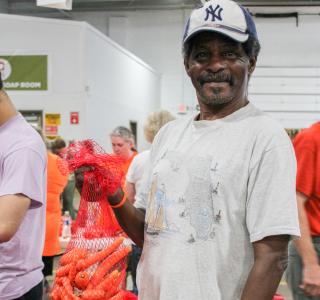 More than 1 in 5 local households seeking food assistance from the Akron-Canton Regional Foodbank, Greater Cleveland Foodbank and Second Harvest Food Bank of North Central Ohio’s network in Northeast Ohio contain a veteran or an active member of the military.

Hunger in America 2014, released in August, was conducted by these Northeast Ohio food banks in partnership with Feeding America, the nation’s leading domestic hunger-relief organization. Nationally, Hunger in America 2014 found that among the more than 46 million people who turn to agencies and programs of the Feeding America network of food banks every year were many veterans; nationally, as well as locally, 20% of families seeking assistance contained a member of the military. Here in Northeast Ohio, more than 574,000 people turn to hunger programs annually.

The study documents client household demographics and the challenges that our clients face. It is the first study that assesses the prevalence of food insecurity among past and active members of the U.S. Military.

“Many of my mentors and leaders I’ve known in our food bank network over the years are former military officers and veterans,” said Dan Flowers, president & CEO of the Akron-Canton Regional Foodbank. “Military expertise has left a significant imprint on our work and I hire veterans every chance I get.  Today those vets have a new mission, taking care their brothers and sisters in arms that struggle to make ends meet in huge numbers every day.”

“It is heartbreaking to realize that so many of the people we serve are current or former military members,” said Shirley Stineman, Board Chair of the Greater Cleveland Food Bank. “These men and women served their country, and here they are struggling to survive on the home front as well. We are proud to be here for them to help them meet this most basic need.  As we look ahead to the holidays, it is important to remember the critical work our food banks do every day, and how much more we can do together to solve hunger in Northeast Ohio.”

“Our veterans have sacrificed so much to keep us all safe, so it’s troubling to know that they struggle with food insecurity,” said Julie Chase-Morefield, Executive Director of Second Harvest Food Bank of North Central Ohio. “We owe it to them to shed light on the plight of veterans and do more to help those who proudly served our country.”

Although the nation has recovered the number of jobs lost in the recession, Ohio is still more than 114,000 jobs behind.   Moreover, most jobs lost during the recession were high wage or middle wage jobs, but most jobs added back have been low wage jobs.

Veteran Bill Hicks contacted the Greater Cleveland Food Bank in July for help with food.  He was laid off from his job a year ago, and unemployment benefits had expired a couple of weeks before he called.  Bill was told that he would probably be hired back, but he is actively looking for work through the Veteran’s Service Commission and a temp agency. He is still hoping to be called back to work in 2015.

More than two in three households had income at or below the federal poverty level ($19,530 for a household of three in 2013), forcing them to make sacrifices between one necessity and another.

Following are the choices client households reported making in the past 12 months:

More than half of households reported using three or more coping strategies for getting enough food in the past 12 months.  The frequency of these strategies among all households include:

Hunger in America 2014 was conducted using rigorous academic research standards and was peer reviewed by a technical advisory team including researchers from American University, University of Illinois at Champaign-Urbana and the Urban Institute. Nationally, confidential responses were collected on electronic tablets by 6,000 trained data collectors, the majority of whom were volunteers.