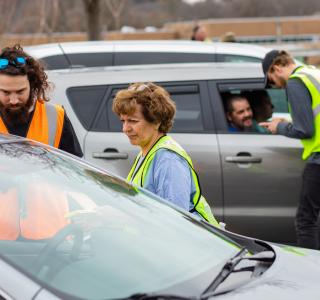 The Akron-Canton Regional Foodbank hosted its monthly Neighborhood Distribution yesterday. Typically held the fourth Thursday of each month, the distribution couldn’t come at a better time for community members struggling to make ends meet. It was an impactful day for the Foodbank, serving nearly 1,300 families in a mere three hours through its drive-through grocery distribution.

This distribution, however, was unique. As the coronavirus continues to force more people out of work, families are struggling, children and seniors are going without. More than half of the families served were first-time recipients of the Foodbank’s distribution, and some have never visited a food program in their lives. All who drove through the line, backed up from the Foodbank to Spaghetti Warehouse, expressed how grateful they were for the 26-pound box of shelf-stable food items and the large bags of fresh produce they received.

Though cars were lined up for at least a mile, families waiting in line went through it relatively quickly, mainly because of the efficient help received from the Ohio National Guard members. Four lanes of cars were checked in and packed with food simultaneously, making the process seamless.

“We’re extremely grateful for the service of these guardsmen,” said Foodbank president and CEO Dan Flowers. “They left their families and jobs, putting their own health at risk, to serve their community and work alongside us. It’s been an honor to work with them and have them on board as honorary Foodbankers.”

Earlier this week, the Foodbank made the difficult decision to halt all volunteer activities in order to practice physical distancing and to keep the remaining staff members and guardsmen safe. The Ohio National Guard joined the Foodbank on Monday helping to replenish volunteers and supplement staff efforts. They help pack emergency food boxes, rebottle bulk soap and hand sanitizer, and work in the warehouse helping pick orders.