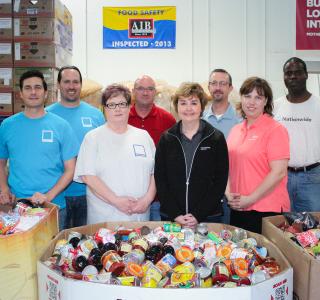 The Akron-Canton Regional Foodbank announced today they were awarded one of the nearly two dozen grants provided by the Nationwide Insurance Foundation to help bring additional food to families in need. The Foodbank was granted $45,000 to be used toward its community hunger-relief strategy.

“We’re grateful to be awarded this grant from the Nationwide Insurance Foundation,” said Dan Flowers, president & CEO of the Akron-Canton Regional Foodbank. “Nationwide has a long-standing commitment to helping our neighbors struggling with hunger, and with this grant the Foodbank will be able to distribute more food to those who need it most.”

The local grant is part of the Foundation’s $1.43 million commitment to Feeding America this spring in continued support of solving hunger in America. Feeding America is the nation’s leading domestic hunger-relief organization and the Akron-Canton Regional Foodbank is one of its more than 200 members.

“Nationwide is honored to support the Akron-Canton Regional Foodbank,” said Chad Jester, president of the Nationwide Insurance Foundatio­­n. “We’re also proud of the Nationwide associates who give their time in support of hunger-relief initiatives across the country.”

The money comes at a critical time for those facing hunger. According to the U.S. Department of Agriculture, about 49 million people in the U.S. are struggling with hunger, including 16 million children. In the Foodbank’s service area, 1 in 7 individuals will face hunger this year.

To learn how you can join the fight to end hunger in your community, please visit akroncantonfoodbank.org.