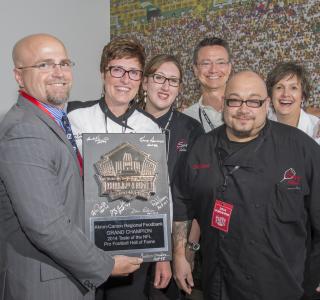 The Akron-Canton Regional Foodbank hosted the seventh annual Taste of the NFL at the Pro Football Hall of Fame on Tuesday evening, Sept. 23, 2014.

Nearly 600 guests in attendance donated funds to provide more than 700,000 meals to support those in our community facing hunger.

“We are once again humbled by the generosity of our community as they huddled together to celebrate the legends of the game and support hunger-relief efforts in Northeast Ohio,” said Dan Flowers, president & CEO of the Akron-Canton Regional Foodbank. “Energy and goodness truly filled the Pro Football Hall of Fame tonight at Taste of the NFL.”

Hall of Famers attended the event to mingle with guests and sign autographs. 2014 Hall of Fame inductee Andre Reed was a popular Hall of Famer with guests. He was joined by Joe DeLamielleure, Randall McDaniel, Anthony Muñoz, Dave Robinson, Ron Yary, Ken Houston and Jack Youngblood.

This year’s event highlighted delectable cuisine and beverages provided by more than 20 local and national vendors. Some of the area’s top chefs came together for the Foodbank and also to compete for the title of Taste of the NFL Grand Champion.

SHY Cellars was crowned the Grand Champion for the second year in a row and will represent the Pro Football Hall of Fame and the Foodbank at the national Taste of the NFL event, held on the eve of the Super Bowl in 2015. Chef Sherry Schie and her team won the event by serving delicious spicy shrimp and grits topped with bacon and scallions.

Meeker Vineyards from California was the featured winery at the event. Molly Meeker, co-owner of Meeker Vineyards, originally from Youngstown, was present to mingle with guests and offer wine tasting tips.

Taste of the NFL is a partnership between NFL teams and food banks across the country.  Local events are held in NFL cities throughout the year and a national Taste of the NFL is held on the eve of the Super Bowl. The Akron-Canton Regional Foodbank partners with the Pro Football Hall of Fame.

For more information about the Taste of the NFL or the Akron-Canton Regional Foodbank visit akroncantonfoodbank.org or call 330.535.6900. Taste of the NFL is presented by The Grainger Foundation, 94.9 WQMX, 97.5 WONE and AkronNewsNow.com, powered by 1590 WAKR.